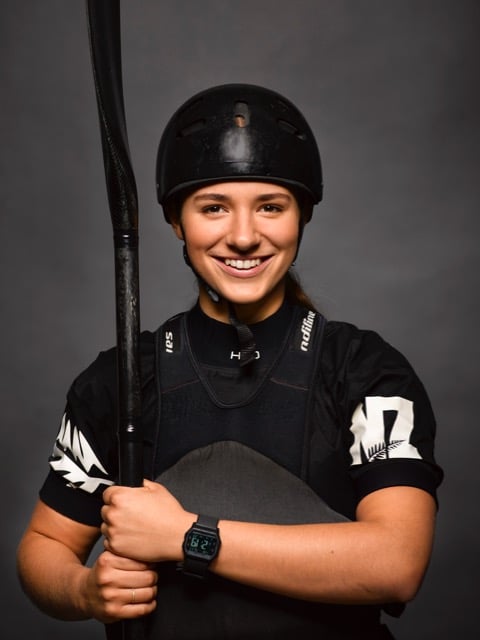 Claudia Paterson is the under-18 national canoe slalom champion for 2017. She finished in the top-20 in the world at the recent Junior World Championships in Slovakia: one of only five out of the New Zealand team of 16 athletes to reach the semi-finals. This was a commendable result – especially in Eastern Europe, where slalom is such a popular sport athletes are household names – but even more so given she was off white-water for most of the previous year after a major accident and shoulder surgery in the winter of 2016. The long months of rehab and a successful comeback showed grit and resilience.

Claudia has won five national titles in canoe slalom since taking up the sport as a 12-year-old: three in K1 (sitting in the canoe using a two-bladed paddle) and two in C1 (kneeling with a one-bladed paddle). She has been selected for the New Zealand junior team every year since 2015; and she was the only New Zealander to make the podium at both the Australian Open and the Oceania Championships in 2016. At the 2017 National Championships she not only retained her K1 title in the under-18 age-group, but came third overall – behind Olympic medallist Luuka Jones and NZ senior team member Jane Nicholas. She is aiming to be selected for the New Zealand Under-23 team in 2018.

Off the water, she is completing Year 13 at Bethlehem College in Tauranga, before heading to Waikato University to embark on a law and arts degree in 2018. She will juggle academics with training in three cities every week: Auckland, Hamilton and Tauranga.