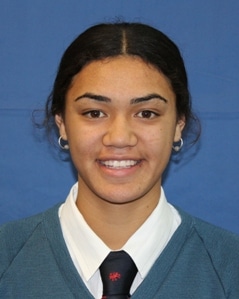 Through her love and passion for a variety of sports, but mainly Netball as her priority sport she has potential to aspire to be the best Netballer she can be. Ki-tana Tuhakaraina has associated with many teams in Waikato which has enhanced her knowledge, skills and ability whilst playing netball. Some of the team’s that Ki-tana has been a part of is the Hamilton City U17 team’s, St Peter’s Premier Netball team and both Level 1 and 2 Magic Development just to name a few of the teams. This has given her the drive to keep working hard to strive and achieve the goals that she has set for herself. In doing this there is going to be a lot of sacrifices made such as less sleep or sacrificing hanging out with her friends on the weekends in order for her to be able to achieve her goals.
She has had the opportunity to captain some the netball teams that she has been a part of, for her this was a privilege. One of the highlight’s that she has when being a captain was experiencing playing against South Africa while playing for the Invitational Secondary School team. She enjoyed experiencing being captain because this has influenced who she is today.
Ki-tana Tuhakaraina currently lives in Huntly with her family. All her family members are fully supportive of participating in sports, therefore this guides her to live a healthy lifestyle. She is very grateful for the sacrifices her family has made for her. Her family have taught valuable values such as being honest, trustworthy, work hard, try you best and many other values that has encouraged her to be a better and stronger young lady. Family means a lot to Ki-tana, because at the end of the day they will always be there for you no matter what.
She has been fortunate enough to attend St Peter’s, Cambridge from half way through being year 12. She was able to complete her final year as a year 13 at St Peters Cambridge earning many achievements both culturally and physically with sports. Though attending Huntly College before attending St Peter’s she gained her NCEA Level 1 certificate and she gained her NCEA Level 2 certificate at St Peter’s. She is currently still working towards gaining her Level 3 certificate. Academically her goal for 2018 is to go University to study teaching, otherwise to join the Police Academy. However there will be small steps taken to get there bur she is really excited for the journey.
Ki-tana likes challenges because she has to work harder to get to her destination. Nothing ever comes easy and the only way to get what you want is to work hard. Work ethic is a key value for Ki-tana because she has had many obstacles stand in her road to achieving whatever it may be but this has never stopped her.
Ki-tana’s favorite quote that she aspires to is:
“Work hard in silence, and let success be your noise”